On a Wednesday morning, Kyla King’s expectations of a litter of newborn kittens was way beyond what she had ever imagined.

When she checked up on the place she had specially set up for the mother to give birth, she was pleasantly surprised to see four kittens, but then also noticed another two hiding behind mom. Moving one of them first to join the rest of the litter and then picking up the other one, she encountered a sight never to be forgotten – one kitten with 2 sets of eyes squeezed tightly shut, 2 little noses and 2 mewling mouths wanting food!

Kyla took a picture to send to her husband BJ, with a text saying “We have 6-1/3 kitty cats now!” 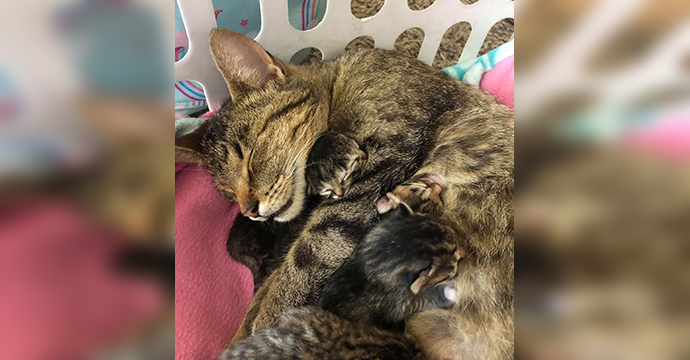 Kyla spoke to their vet about what to do with this kitten and what it’s chances of survival were. Not much could actually be done other than care and nurture it as much as possible, by keeping it content and assisting with feeding.

Kyla said, “It doesn’t really know how to nurse properly because it has two mouths so I’ve been trying to feed it, and I mean, I’m gonna do the best I can, but these animals don’t usually live too long”

They decided to share this unique event on social media and also on their local community news page, Albany Happenings, on the request from one of their children.

BJ said, “We’ll probably get a little bit of reaction out of this and it took off really fast.  We’re not super optimistic, but it does seem pretty lively and has an appetite and seems to be doing pretty well.” 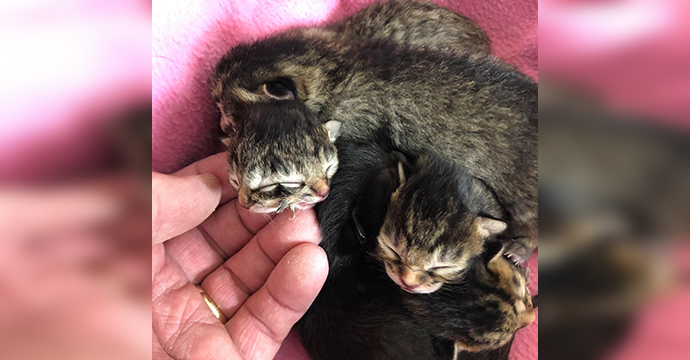 Named Biscuits and Gravy, and called Biscuit for short, are being cared for by Kyla who bottle feeds them and keeps them snug – sometimes tucked into her shirt.  Unfortunately BJ is allergic to cats, so it’s the spare room for Kyla and Biscuit at bedtime!

Biscuit’s mom was also incidentally hand raised by Kyla too and is their only tame barn cat living on their farm.

Kyla said “It’s smaller than the other kittens but it could be the runt, too, on top of having two faces,”

There is record of Frank and Louie in the Guinness Book of World Records who lived to the ripe age of 15 years in 2014, making this cat flout the survival of cats with two faces and is known as the  world’s longest surviving Janus cat.

Two faced cats are known as “Janus” cats named after the Roman god Janus that was frequently portrayed with two faces in mythology.   It is actually an uncommon congenital defect that is called disprosopus, or cranial duplication and most that have been born like this don’t usually survive longer than a a day.

For BJ and Kyla they are just taking this day to day and keeping a pragmatic approach to the outcome of their special kitten, Biscuit 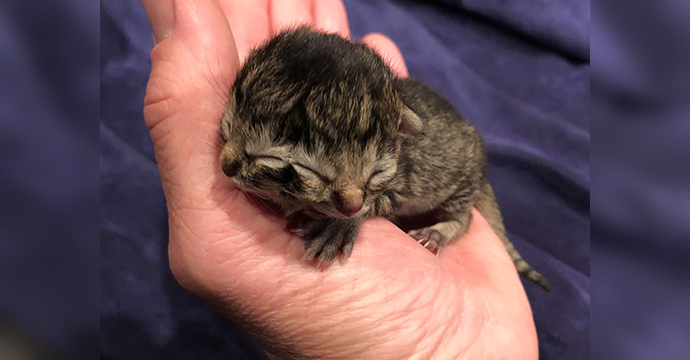 A kitten that can meow and eat at the same time is something quite special!  BJ said, “Meow out of one mouth and eat out of the other,” Quite unique!

It is not known yet if Biscuits’ eyes are co-joined, or if there are four separate eyes.  Kyla said,“If it lives long enough—like a week—we’ll be able to tell what its eyes look like,”

Even with having received multiple appeals from people wanting to take on this special kitten, the Kings are going to keep it and enjoy as much time as they have with Biscuits and Gravy.