Home » Nature » Meet The Stunning Kea, The Only Alpine Parrot In The World

Meet The Stunning Kea, The Only Alpine Parrot In The World

Renowned conservationist, David Attenborough filmed a documentary called ‘The Smartest Parrot’ for BBC that portrayed this fascinating bird known to be one of the smartest and most playful of its species.

This documentary on the Kea, was filmed on the west coast of the South Island, New Zealand where these birds are found. Their habitat spans around 3,5 million hectares and they used be prolific in great numbers of 100 000’s but, sadly the numbers have dwindled so much that they are now listed as nationally endangered, with only between 3000 to 7000 being recorded as surviving.

An organisation called the Kea Conservation Trust, are grateful for the recognition of this special bird on the nationally endangered list and also expressed their belief of the Kea being more of an ambassador of New Zealanders than the reclusive Kiwi.

Tamsin Orr-Walker, a co-founder of the Trust said, “A lot of people are saying the Kea should be our national bird because they so much epitomize what it is to be a New Zealander: adventurous and up for a challenge and maybe a bit misunderstood,” she said. 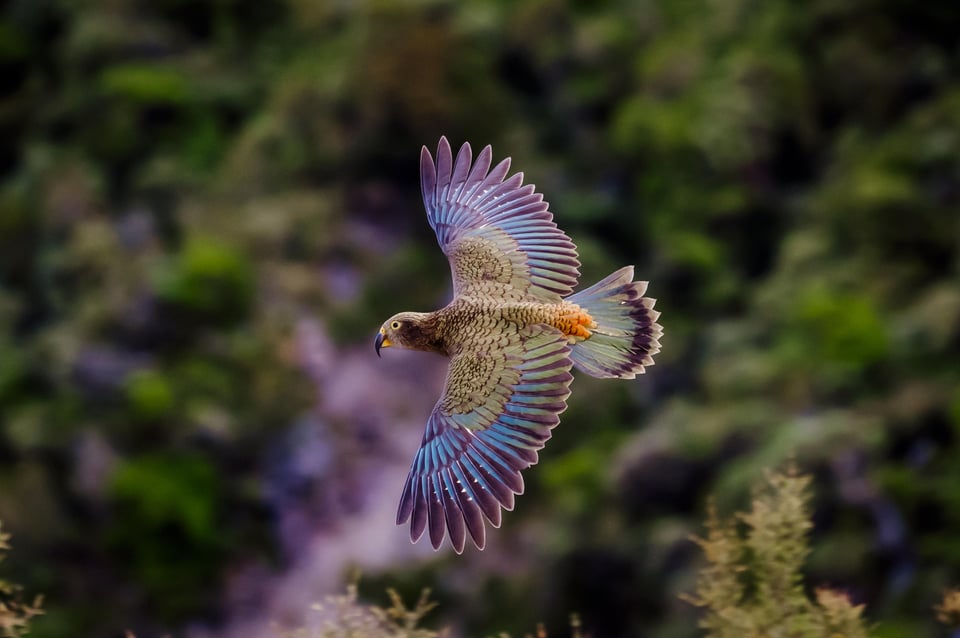 “I think New Zealanders are starting to realise how special Kea are; they are interactive birds and seek out humans which is very unusual. The fact they are declining from our mountains is alarming.”

Current research from the Kea Conservation Trust determined that 2-thirds of chicks sadly do not achieve the fledgling phase as their nests are ground based making them easy prey for stoats, rats and possums. (incidentally NZ government has promised to eradicate possums by 2050)

Orr-Walker said the threat to kea was three-pronged: from introduced species, lead poisoning from old-fashioned alpine dwellings such as huts and shearing sheds, and from their interactions with humans, which include being hit by cars or fed inappropriate food.

Lead poisoning was particularly difficult to tackle, Orr-Walker said, as there were thousands of old buildings dotted around remote parts the South Island that could poison inquisitive kea. The effects of lead poisoning on the birds were disastrous, including brain damage and death. 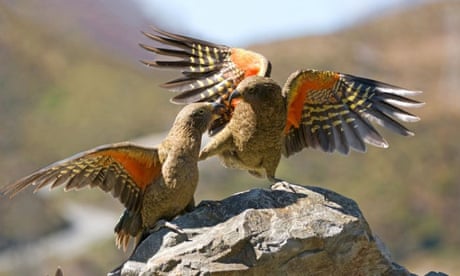 An estimated 150,000 kea were killed from the 1860s onwards due to a government bounty introduced after conflict with sheep farmers.

The department of conservation and the Kea Conservation Trust continue to record intentional kea deaths each year (either shot, bludgeoned or poisoned by humans) though such incidents are thought to be under-reported. 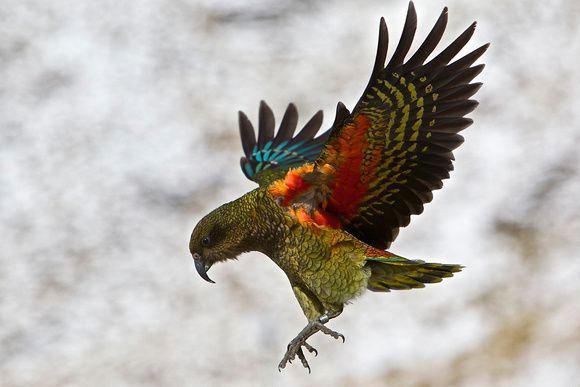 “Education efforts have gone a long way towards New Zealanders learning to love and respect the kea, but if the kea cause financial loss or begin to hit people’s bottom line, that is when we are still hearing stories of kea being killed,” said Josh Kemp, a kea expert at New Zealand’s department of conservation.

Despite their protected status, keas have divided Kiwis between those who enjoy the cheeky parrot’s animated nature and those who curse its destructive habits such as damaging cars, tents and buildings in alpine environments, attacking stock and habitually stealing food.