Train Crashes Through Barrier And Lands On Giant Whale Sculpture

A train in the Netherlands has landed on a whale tail sculpture after crashing through a barrier.

The train smashed through a buffer at De Akkers metro station, near Rotterdam, at around 11.30pm last night (Sunday 1 November).

Fortunately, there were no passengers on board and the driver was able to exit the train himself, before going to hospital for a check-up.

As you can see, the train itself sustained significant damage in the crash. But this damage could have been far worse if it hadn’t been for the whale tail, which is now suspending a carriage 10 metres above a footpath and a body of water.

A local resident who was awoken by the crash told Dutch News: “It was a noise that lasted two or three seconds.

“I realised there was something on the tail… I thought, ‘Something very odd is happening here.'”

Now, the task for authorities is figuring out why the train derailed, and how it can be dewhaled.

A police spokesperson told local media: “It is at a height of 10 meters at the end of the rail. It will be quite an exercise, it will take some time.”

The driver has now been arrested and is being questioned by police, according to Rijnmondveilig.

The sculpture by Maarten Struijs, creatively named ‘Whale Tails’, was installed in 2002 and was intended to represent the end of the line – which it really does now. 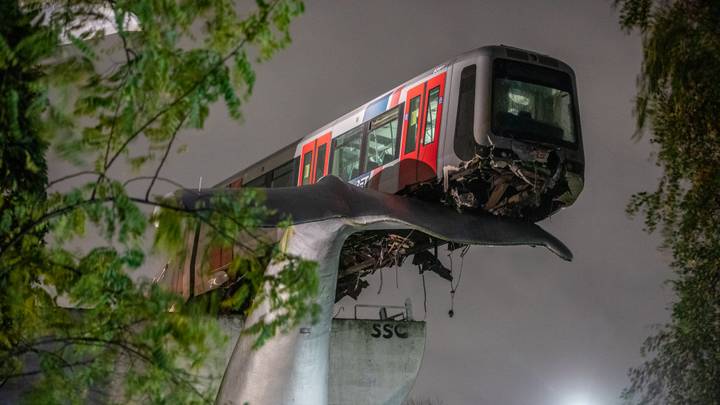 Perhaps they should just leave the carriage there and make it part of the installation? Would certainly save a lot of hassle.

I’m sure Maarten could think of something artsy to stick on a new plaque.

‘Whale Tail Rail’, 1/11/20: ‘This immersive sculpture represents the harmful impact of the transport industry on wildlife and the environment, while shining a light on our own dependence on nature.’